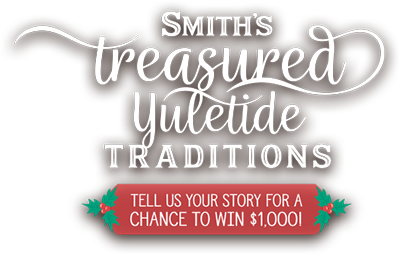 We'd love to hear what makes your holiday season bright. Is it helping grandma whip up her famous mashed potatoes? Crafting the ugliest sweater possible for the annual soiree? Or staying awake on Christmas Eve for a possible glimpse of eight tiny reindeer?

One grand prize winner will receive $1,000, and two runners-up will enjoy free Smith’s dairy products for a year!

*By submitting your story and photo, you give Smith’s your consent to share this content on our social media platforms as part of the Smith’s Treasured Yuletide Traditions contest. FULL RULES AND REGULATIONS

BARB ABBOTT — A Cantonian since 2004, Barbara is the founder of Canton Food Tours, which she started in 2012 and is now celebrating 10 years in business. Small group walking tours allow attendees to explore rich local history and discover points of interest while enjoying curated small plates at great restaurants along the way. Barbara is co-author of the book, Stark County FOOD: From Early Farms to Modern Meals, published by The History Press, in 2018, and is also a board member on the following organizations: National First Ladies Library, Aultman Hospital Women’s Board, and VisitCanton, Stark County’s tourism agency. Barbara lives in Canton with her husband and 16-year-old son. In her spare time she enjoys reading, birdwatching, motorcycling, playing violin, and traveling. A carton of Smith’s Chocolate Milk is always in the fridge to keep her energy levels up and ready for the next adventure!


GLENN ANDERSON — Cleveland born Glenn Anderson can be heard weekdays from 3pm-7pm on Star 102. Glenn has been a part of Cleveland radio for over 20 years and has interviewed everyone from President Obama to Clint Eastwood. He's had amazing opportunities to broadcast live from Disney World, The Island of St. Martin and backstage at The Screen Actors Guild Awards. Glenn is best known as “Glenn The Funny Song Man” due to his numerous parody songs that he writes, produces and sings.


MAUREEN ATER — Maureen "Mo" Ater serves as the Vice President of Marketing and Development for Goodwill Industries of Greater Cleveland and East Central Ohio, one of the largest nonprofits in Northeast Ohio. She also is the director for The Ken Weber Community Campus at Goodwill, a collaborative site home to 20 other nonprofit organizations. Mo is a self-proclaimed Christmas fanatic. She proudly puts up 14 trees in her home each year and has an extensive collection of vintage Christmas collectibles. She is the co-founder of The Christmas Gals, a blog and Facebook page dedicated to all things Christmas, where she and her childhood friend share their love of Christmas year-round with followers through their site. Mo and her husband Patrick are both lifetime residents of Stark County and currently live in the Canton area with their three daughters.

KELSEY DAVIS — Kelsey Davis is the food and dining reporter for The Canton Repository. She is a 2013 graduate of Kent State University. She resides in North Canton with her husband and two cats. When she's not writing, you can find her reading, running, enjoying the outdoors, taking pictures, or sipping coffee.

MATT WELSCH — Matt Welsch is an award winning chef and restaurateur in Wheeling, West Virginia. He began his culinary journey in the dish pits of his college campus and has manned the lines in kitchens all over the country as he rode his motorcycle along blue highways to sample the culinary diversity of the United States. Chef Matt has been featured on Guy's Grocery Games, The Cast Iron Cookoff, West Virginia's 40 Under 40, Taste WV, WV Living, and Bon Appetit. He believes simply that everyone deserves to eat good food.